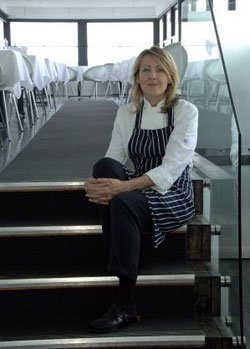 Our presenter on this occasion is Katrina Kanetani who with her Hawaiian husband Karl has owned ‘Town’ restaurant (formerly Ate) for just over one year in Bangalow.

Katrina will tell us about her brilliant career, and how it led her to meeting Karl in MG Garage in Sydney and working at The Pier Restaurant and Peter Doyle’s at Cicada.

Katrina very soon became known as Australia’s Queen of the Dessert from working in some very prestigious establishments including Peter Doyle’s at Cicada.

From Sydney Katrina took off for London and worked at Mezzo then for the notorious Gordon Ramsay at L’Oranger, Quo Vidas and Le Mancoiraux Quat Saisons.

She has also worked in New York and a few other amazing places in of the world.

In 2007 Katrina was awarded the SMH good food guide chef of the year.

Not only has Byron and Beyond Networking rocket-charged my business but it’s filled my address book with so many wonderful new friends.

These mornings are truly wonderful opportunities to meet enterprising people.

Beautiful breakfasts, fabulous people and amazing new opportunities – thank you BNB for everything you’ve done for our businesses!